For centuries, physicians and researchers have used animals to better understand the functioning of human organs and systems and improve their surgical skills. Animal research has been essential to the expansion of knowledge and to new discoveries in science.

Rodents, such as rats and mice, have been the most traditional animal model used in research. These mammals have been considered good test subjects for a number of reasons, including similarities to the human genome, small size and high breeding rate.

In accordance with animal welfare legislation, they must be kept in good health and hygiene to be used for scientific purposes. However, there has been growing criticism from various segments of society because of the animal suffering caused by experimentation. In 2014, the National Council for the Control of Animal Experimentation (CONCEA), linked to the Ministry of Science, Technology, Innovation and Communication, recognized alternative methods with the objective of reducing the number of animals used in research. These include in vitro cellular and computer models, among others. 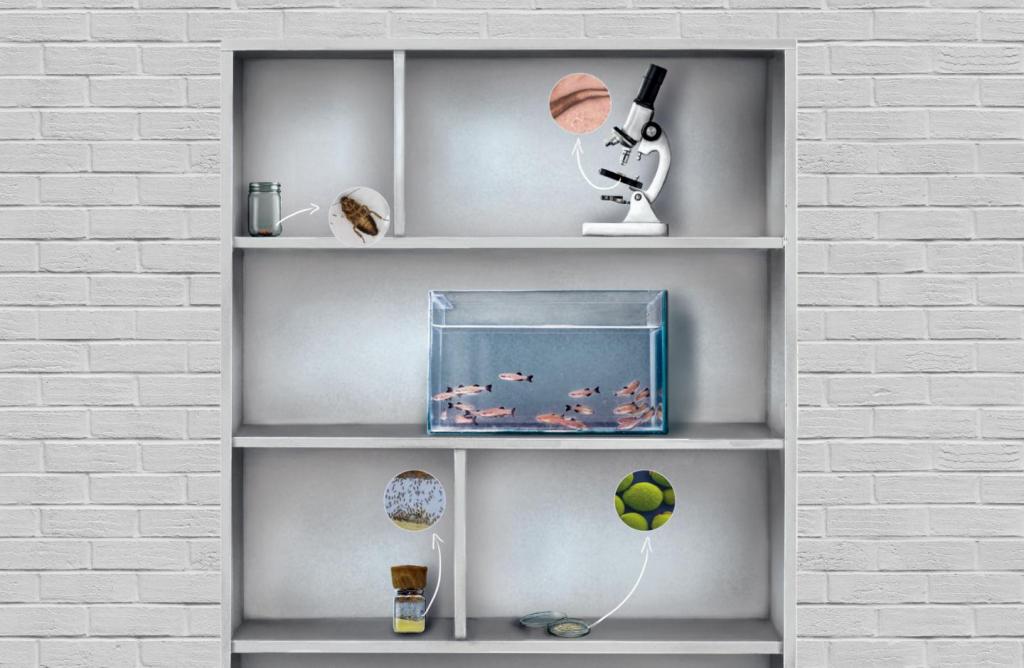 UFSM has been working to reduce animal testing by employing alternative model organisms. A model organism is any living organism used to study different biological processes that mimic those which occur in humans. Alternative organisms, such as worms and zebrafish, can complement or replace traditional rodent models. In 2005, the UFSM Ethics Committee on Animal Use (CEUA) was created to approve, control and supervise animal breeding and use in teaching and research activities, ensuring compliance with the standards defined by CONCEA. According to the coordinator of CEUA / UFSM, Daniela Bitencourt Rosa Leal, one of the Committee’s roles is to encourage adoption of the principles of refinement, reduction and substitution within the scope of animal use for teaching and scientific research.

Professors from the UFSM Postgraduate Program in Toxicological Biochemistry have been working with several different organisms in their research. Dr. Félix Antunes Soares has worked with worms (Caenorhabditis elegans) since 2010. Dr. Denis Rosemberg has developed research using zebrafish since his undergraduate studies in 2005. Dr. Nilda Barbosa has used flies (Drosophila melanogaster) since 2011 and has also conducted research using yeasts (Saccharomyces cerevisiae). Dr. João Batista da Rocha has worked with cockroaches (Nauphoeta cinerea) for about 5 years. These are just a few examples of research being developed at UFSM with alternative model organisms, in some cases with more than one type of organism being used in parallel experiments.

“The aim is reduce the number of large and expensive animals used in research and to find alternatives that can answer complex questions” says CEUA researcher and vice-coordinator Denis Rosemberg.

Since the first studies using alternative organisms at UFSM, the number of mammals used in research, such as mice and rats, has decreased considerably, as some professors have stopped using them altogether and others have reduced their use after adopting other model organisms.

Dr. Félix Soares, professor from the Department of Biological Sciences, emphasizes that, despite replacing mammals in experiments, animals are still used. “In the future we may be able to work with cell lines, but this method is quite expensive. In addition, you need a specialized laboratory and trained researchers. For now, these alternative organisms are still our best option” he says.

Storage and care of alternative organisms is also more practical, considering the needs for temperature, light and space of mammals. Dr. Soares also believes that it is easier for students to work with these organisms, since they are easier to handle than mammals.

Cockroaches are easy to handle and 64% of their genome is similar to the human genome. Breeding takes place in temperature-controlled containers kept at between 18 and 25 degrees in the winter and between 25 and 35 degrees in the summer. They have a relatively long life cycle, of around 2 years, and can be used in chemical, molecular and behavioral analyses.

These worms are smaller than 1mm and transparent, which facilitates maintenance and microscopic analysis, and 80% of their genome is similar to that of humans. In addition, genetic manipulation of the worm is relatively simple. Worms can be used to study ways to decrease or even eliminate expression of the beta-amyloid protein, one of the proteins linked to Alzheimer’s disease.

This fish has a high breeding rate since a single couple can produce more than 200 larvae under ideal conditions and 70% of its genome is similar to the human genome. Unlike mammals, the Zebrafish has a significant capacity for neuronal regeneration, which favors the study of mechanisms associated with cell regeneration after neuron damage. Due to its well-defined behaviors, the zebrafish can be used for modeling alcohol intoxication, stress, anxiety, and even depression. Moreover, the zebrafish can be used in toxicology, biochemistry, and behavioral neuroscience.

These flies have well-developed reproduction parameters and are easy to handle, with 60% to 80% of their genome similar to that of humans. They are bred in glass containers and kept at a temperature between 20 and 24 degrees. They feed on maize meal and live for about 60 days, so they can be used in analyses of their full life cycle, from the larval to the adult stage of life. Research on neurological and metabolic diseases, such as Parkinson’s, Alzheimer’s and diabetes can be done using these organisms.

Yeasts are stored in 150-ml plates and kept at a temperature of 30 degrees. Because they are eukaryotic single-celled microorganisms – present in plants, fungi and humans – they have several genes homologous to those present in the human body. One of the advantages of using yeasts is that analyses can be completed in 48 hours. They can be used in research on toxicology and aging.