The path of discovery 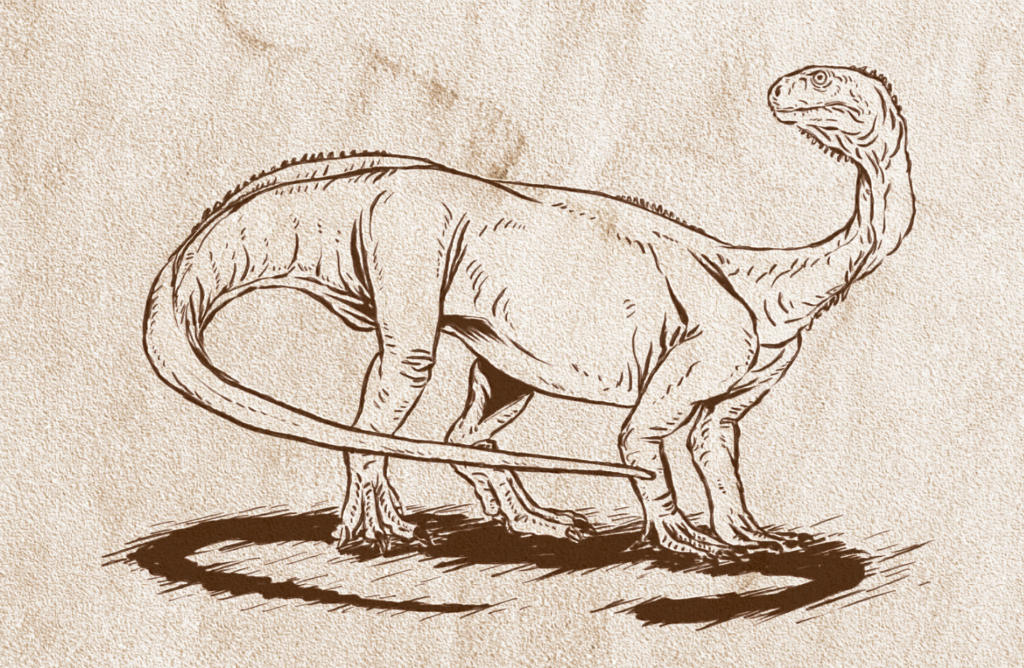 The central region of Rio Grande do Sul is a key area in the national paleontological scene. It has been the stage of great discoveries, such as Staurikosaurus pricei, the oldest dinosaur in Brazil and among the oldest in the world. These internationally recognized discoveries were made within an area of around 250 kilometers, encompassing several cities in the Quarta Colônia Region, around 30 km NE of Santa Maria.

Paleontology is the study of the history of life on Earth. By studying fossils, it aims to discover information about organisms existing in the various geological periods and to understand the processes responsible for the emergence of certain species and for the extinction of others. Currently, it is a multidisciplinary field with direct involvement of areas such as biology, geography, archeology and geology. Given the wealth of information contained in fossils, their sites of occurrence must be preserved. However, this natural heritage is often threatened by enterprises that damage or illegally exploit these sites. This worries paleontologists and puts at risk our knowledge and understanding of the rich biological history of the planet.

Today, part of this history is told by researchers at the Center for Paleontological Research in the Quarta Colônia (CAPPA / UFSM), located in São João do Polêsine and coordinated by Professor Sérgio Dias da Silva, and the Laboratory of Stratigraphy and Paleobiology, coordinated by Professor Átila Stock da Rosa, both linked to UFSM. The following timeline details the main discoveries made in Rio Grande do Sul. Rather than an unabridged chronology, it is intended to provide a brief overview of local paleontological history.

The geographer Antero de Almeida discovers the first animal fossils in the creeks that run through the district of Alemoa, which becomes a site known as the Sanga da Alemoa. Almeida also discovered the Chiniquá site.

Dr. Jango Fischer, a Brazilian diplomat in Chile originally from Santa Maria, visits the Sanga da Alemoa on one of his trips home and collects several fossils, which are later studied by Dr. Arthur S. Woodward and classified as Scaphonyx fischeri, today known as Hyperodapedon, one of the first fossil reptiles discovered in Brazil.

The ophthalmologist Dr. Guilherme Rau assists German paleontologist Dr. H. Lotz in his excavations. Together, they dig up about 200 pieces in the two-year period. During this time, Dr. Lotz teaches Atílio Munari, a 14-year-old from Santa Maria, to search for, excavate, and carefully prepare the fossil findings. Munari assisted more than 11 geologists and paleontologists who came to do research in Santa Maria until his death in 1941.

The arrival of the German geologist and researcher Bruno von Freyberg influences Vicentino Prestes de Almeida, a young surveyor from the region, who decides to study paleontology. Vicentino found a jaw of a pseudosuchian at the Chiniquá Paleontological Site in São Pedro do Sul, which was sent to Germany and analyzed by the renowned paleontologist Friedrich von Huene. The discovery led to a visit from Huene to Rio Grande do Sul in 1928. Vicentino had such an active participation in paleontology at the time that Friedrich von Huene named the fossil Prestosuchus chiniquensis, discovered in 1938, in his honor.

Guilherme Rau excavates the skull of a Gomphodontonsuchus brasiliensis, a cynodont studied by Friedrich von Huene, at Sanga da Alemoa.

Friedrich von Huene and his most esteemed student, Rudolf Stahlecker, come to Santa Maria after receiving fossil materials from the region over a period of several years. The Germans’ expedition lasted ten months and a total of 8,600 kilos of solid rock blocks containing skeletons and isolated bony elements was boxed and sent for analysis in Germany. Thanks to this expedition, the Tübingen museum now has the nearly complete skeletons of more than five different species, including Stahleckeria potens and Traversodon stahleckeri.

The Brazilian Llewellyn Ivor Price accompanies an expedition in the region with researchers from Harvard University. Among other species, the expedition discovered Staurikosaurus pricei, which was only analyzed and named in 1970 by the American paleontologist Edwin Colbert. Staurikosaurus, one of the oldest dinosaurs found to date, is classified as a basal saurischian, which arose before the division of the order into its two main suborders, Theropoda and Sauropodomorpha.

The priest Daniel Cargnin collects around 50 skulls of cynodonts and dicynodonts in several cities throughout the region and perhaps an even greater number of skulls of rhynchosaurs, 36 of which are displayed today at the museum Vicente Pallotti, in Santa Maria. His list of discoveries also includes the cynodont Protuberum cabralensis.

The paleontologist Max Cardoso Langer discovers Saturnalia tupiniquim at Sanga da Alemoa. One of the oldest dinosaurs ever found, it lived at the end of the Triassic period, like Staurikosaurus pricei, approximately 230 million years ago.

Researchers from UFSM and the National Museum of the Universidade Federal do Rio de Janeiro publish the discovery of yet another dinosaur in Brazil, Unaysaurus tolentinoi, which lived around 225 million years ago. The fossil was discovered in 1998, near the city of São Martinho da Serra, by a retired resident of the region, Mr. Tolentino, who was commemorated in the naming of the new species. When finding the first fragment of the fossil, he contacted UFSM.

The discovery of Sacisaurus agudoensis is announced. The first fossil of the species was found in 2000 near the city of Agudo. The excavation eventually revealed several bones, including 19 right femurs, prompting the researchers to name the species Sacisaurus, as a reference to Saci, a one-legged mythical character from Brazilian folklore. The fossil, of approximately 220 million years of age, was initially believed to be from a dinosaur, but research later concluded that it is not from the clade Dinosauria, although it is very closely related.

A well-preserved skull of a cynodont of the genus Luangwa is found near the town of Dona Francisca. This species is generally found only in Africa.

Researchers from the Universidade Luterana do Brasil (ULBRA) publish a description of fossils of the dinosaur Pampadromaeus barberenai. The bones formed an incomplete and disjointed but well-preserved skeleton of a single individual of the species. The “Pampas runner”, as the name suggests, was biped and relatively small, only 50 centimeters tall and 120 centimeters long.

Fossils from three dinosaurs are found in the countryside of Agudo by researchers from the Universidade Federal do Pampa (UNIPAMPA). The bones include two almost complete skeletons, which is very rare and the only recorded occurrence of this type on Brazilian territory. Researchers estimate the age of the bones to be 225 million years old and believe that these fossils may belong to a new species. The material is now registered in the CAPPA/UFSM collection.

The Center for Paleontological Research in the Quarta Colônia (CAPPA / UFSM) is inaugurated in São João do Polêsine. The Center is a unit of UFSM and aims to bring together and support professionals who explore the paleontological sites of the central region of Rio Grande do Sul.

Researchers from UFSM, Ulbra and USP find a fossil in the city of São João do Polêsine from one of the oldest dinosaurs so far discovered in the world. The fossil belongs to the Buriolestes schultzi species and is estimated to have lived 233 million years ago. With this new discovery, Brazil now possesses the skeleton of a primitive dinosaur as complete as those found in Argentina, reinforcing the importance of fossils from the state of Rio Grande do Sul to our understanding of the origin of dinosaurs.

Brazilian researchers publish a study on Macrocollum itaquii, a new species of dinosaur found in Brazil. About 3.5 meters long, the most striking thing about the animals of the group is their very long necks and the fact that they are much older than any other long-necked dinosaur yet described. The rocks from which the skeletons of the species were excavated are about 225 million years old. This makes the new Brazilian dinosaur the oldest “long neck” ever discovered. The skeletons, found in the city of Agudo and collected in early 2013, underwent careful preparation work to preserve their remains.

A group of amniotes of pre-Mammalian lineage that would eventually evolve into the first mammals. It is believed that they were warm-blooded and had fur. They were named cynodont (“dog tooth”) due to their heterodont dentition (incisors, canines, premolars and molars) giving them an appearance that is superficially similar to that of dogs.

Group of prehistoric reptiles from the Triassic period. The name means false crocodiles, precisely because the group is superficially similar to modern crocodiles.